The CAC is pleased to announce the following persons ordained or received as pastors/ministers by our Communion:

We have been hearing from people from all over the country and overseas who are interested in our growing fellowship. The CAC has truly become an international communion!

Martin lives in Colorado and has been involved
in ministry for several years. He has a special
calling and ministry using animals.

Vester lives in Monrovia, MD, and is involved with
teaching and counceling ministries. Vester feels
called to house church ministry and missionary
endeavors, as well as a ministry of retreats,
pilgrimage, seminars and one-on-one spiritual direction.

JoAnne lives in Martinsburg, West Virginia; she is now providing one-on-one Christian Counseling services to both local persons face-to-face as well as to local and long distance phone clients. JoAnne is also involved in writing and editing Christian literature regarding the need for Spiritual Outreach by believers to people with disabilities, and she has been working with a hospice for the last four years.

Update from Scott: "Following the urging
of our most Holy Father, we have relocated
to Waseca, MN. It has certainly been hard,
but anything worthwhile usually is. I am
planting the seeds of a new parish here in Minnesota."

Scott was one of our first ordained ministers.

Kathryn lives in Sidney, Kentucky, and is a professor of psychology. She has experience in music ministry, children's ministry, and also a counseling ministry.

Kathryn has been called to minister to young adults who have been disenfranchised from the traditional church. She is also leading a monthly spiritual renewal group; they had a retreat last summer that was very enriching.

Kathryn has received a word from God calling her to be a healer, so she will be redirecting her efforts in that direction now.

"Bill" lives in California; he was licensed to
preach with the Assemblies of God upon
graduation from college and served as a
Minister of Christian Education in churches.
He and his wife are calledto missions. He is
on the board of Directors of Happiness
Foundation, Inc. They maintain an orphanage
in Quito Ecuador founded by Bill's late Uncle
Henry F. Davis. He preaches in Spanish while
visiting the orphanage on regular visits.
Additionally, Bill ministers to youth daily, as he
is a public high school Spanish teacher.

Bill is pictured with his wife.

Fr. Tom Mattax was ordained a priest on Easter
2000. He and his wife, Kevyn, were pastors of a
small Celtic/Orthodox church in Oklahoma City
for six years. Fr. Tom has been called to the office
of Pastoral Counselor and has obtained a Ph.D. in
Clinical Pastoral Counseling. His ministry is now
focused upon healing using these God given skills.
He is also employed by the Federal Bureau of Prisons
were he has been working as an educator for the past
17 years.

Joe lives in Blenheim, Ontario, Canada. In his
own words:

"I received my training at Rhema Bible Training
Center. I began in ministry on the streets 28 years
ago. Though, I have served as Pastor, Co-Pastor,
Evangelist, Church planter and in various other
ministries, I still minister one on one in the streets.
I greatly believe that a minister is a servant and is
called into battle ahead of his or her brethren to help
them win their reward (Joshua 1:12-- 1:16). Proverbs
11:30 says, 'He who wins souls is wise'. We are the called of the LORD, and we say with Caleb, 'Give me this Mountain!' I am able to take it! I choose to be a David, running into the valley, not a Saul cowering in the hills. I am excited about the family of the CAC, and the new brethren to stand shoulder to shoulder with, as we go into battle as more than victors.

Pastor Bill Broom from Timmonsville, South
Carolina was ordained into the Celtic Anabaptist
Communion by Bishop Dr. John Stansell. Pastor
Bill's denominational background is both
Southern Baptist and Southern Methodist, where
he served as a trustee, associate pastor and taught
Sunday School. Pastor Bill has an Associate Degree
in Bible & Theology, his chaplaincy in hospice, and
both a Bachelor's and Master's in Ministry, where
he majored in Pastoral Care & Counseling. Rather
than take a traditional church, God called Pastor
Bill into the one-on-one and small group ministry.
After retiring from the business world and working
as a hospice chaplain, Pastor Bill continues as a volunteer hospice chaplain, volunteer hospice veterans affairs coordinator and veterans organization chaplain, taking the church to those who, because of their illness or disability, cannot attend traditional, institutional services. His work takes Pastor Bill into both assisted and skilled care facilities, hospitals and private homes. Pastor Bill's wife Rhonda is a MSN, director of a local hospice and also holds both a Master's and Doctorate in Christian Counseling and a PhD in Christian Leadership. Both Pastor Bill and his wife serve God through hospice. 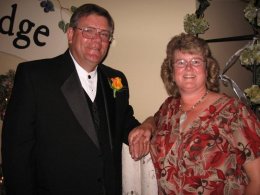