The CAC is pleased to announce the following persons ordained or received as pastors/ministers by our Communion:

We have been hearing from people from all over the country and overseas who are interested in our growing fellowship. The CAC has truly become an international communion!

Tom and his wife, Gail, reside in Birmingham,
Alabama. As a deacon in the Charismatic
Episcopal Church, Tom has taught many Bible
studies, preached many sermons, served on the
rector's council, served as the Director of Christian
Education and has been involved with pastoral
ministries. The CAC is very happy to have Tom
and Gail as part of the CAC family. In Tom's own
words: "I see myself, as a priest, organizing a new
fellowship that embraces a liturgical form of worship
but enjoys freedom from the bondage of an elevated
hierarchy that rules from a distance. My heart is
heavy for the many people I know, who are searching
for an alternative to the Episcopal Church, which has
lost its way. I believe my ministerial calling will
provide a safe place where they will find peace and
enjoy Christian fellowship again."

Crystal lives in Garrett, PA; Krystal has experience in song and praise ministry.

Donald lives in Weedville, PA; he was a lay speaker in the United Methodist Church and feels called to preach the gospel and serve the unfortunate. Donald was ordained by Bishop Thomas Cole of the CAC (picture of ordination below).

Steven lives in Bristol, TN; he has been ordained a minister in the CAC. Steven has held positions as choir director, worship leader, lay speaker, Sunday school teacher, worship team participant and orchestra director in various churches. He currently hosts a bible study group and feels a strong calling to teach the Word of God.

Louis came to us as a minister already ordained;
we have recognized and accepted his previous
ministerial orders. Louis is the head and founder
of a homelss outreach ministry in Modesto,
California, called Avdei L'vi (Servants of L'vi),
established in 2003. They feed some 300 homeless
at 9:30 A.M. and 11:30 A.M on Saturday, and they
minister to the forgotten in our society.

**Update June 2009: "The ministry for Avdei L'vi has expanded and our outreach to the street homeless and less fortunate is going well."

The CAC and Avdei L'vi are entering into a joint relationship whereby the CAC recognizes and accepts Avdei L'vi as a member ministry and established fellowship with full CAC rights and privileges.

Mark lives in Staffordshire, England; his call to ministry has been a lifelong one. Mark has a gift for web design and has been involved in web-based ministry. Mark has an interest in Celtic Christianity and has been giving instruction and information about this. He is interested in broadcasting and has plans in this area, also.


We welcome Shade as a pastor in the CAC.

Samuel Jin lives in Palisades Park, New
Jersey. Brother Samuel's ministry is focused
on youth and young adults. He feels a great
burden for the younger generations of
Korean-American immigrants and is
committed to ministering to them, providing
for them a resting place. Samuel thus has a
strong interest in church planting; he desires
to start churhces in which the Gospel is not
only preached but practiced, in sharing and good
deeds. Samuel also has a heart for other countries
such as China; he hopes to expand his ministry there.

***Update: Samuel has founded a new church called Good Faith Community Church; it's members are about 20 at this time!

Samuel and his wife, who is Chinese-Korean and a practicing doctor in Chinese Medicine, are working together to help the poor and needy in their community, ministering in mercy and medical treatment for those who cannot afford a doctor.

We welcome Brother Samuel Jin as a CAC minister, and we joyfully receive Samuel and his family into the larger CAC family!

We are delighted to receive Abraham Koech as a pastor in the CAC!

"I am a Kenyan citizen ministering at Kapsabet, Kenya.

I am the lecturer and deputy principal of AIC KAPSABET BIBLE COLLEGE [KBC] here at Kapsabet, Kenya. I am married to Leah and we are blessed with two children, Isaac [5 years old] and Faith [5 months old]. I gave my life to Christ on 17th August 1990 and after God's call I took a Theology course at Scott Theological College as from April 1995 to March 1999. I graduated with a Bachelor of Theology Degree [Bth]. I served as a pastor with the Africa Inland Church and in 2001 September I became a teacher here at KBC. We are an Evangelical college; the college was started by Africa Inland Mission [AIM] missionaries in 1954. We have an alumni of over 1200 and most of them are pastors in AIC churches and other evangelical denominations in Kenya, Uganda and Tanzania and Sudan. We thank God for this. At the moment we have 92 students on campus taking a 4-year diploma course in Bible and pastoral studies. 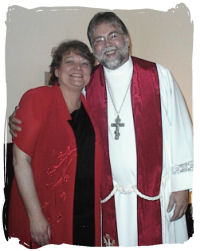 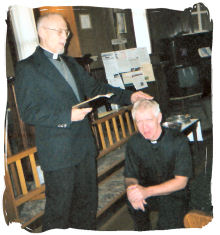 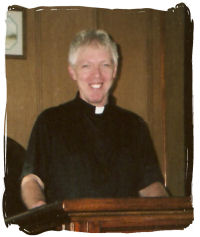 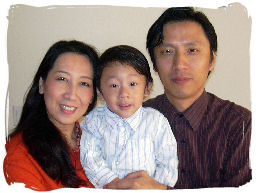